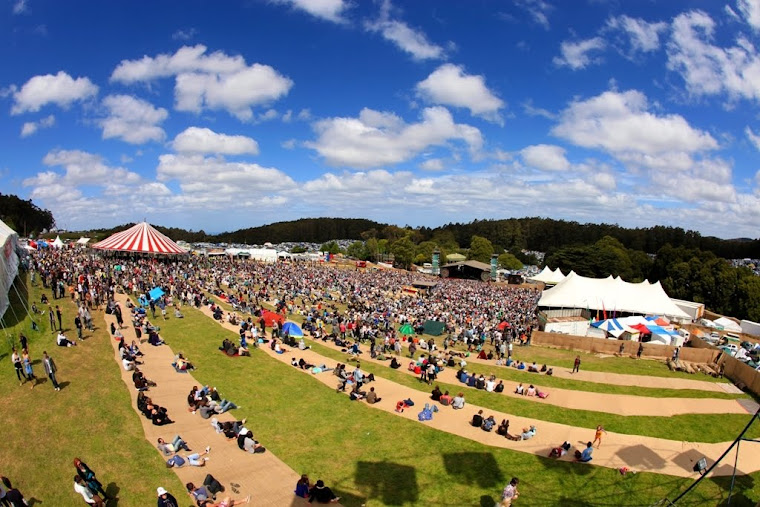 The Falls Festival was created back in 1993 in Lorne, a coastal surf town along The Great Ocean Road in Victoria. The man behind festival was Simon Daly, who had the idea of creating something above and beyond his usual New Years Eve party which normally included family and friends. His idea was to turn his New Years celebration into something the whole community could be apart of and enjoy.
At that time, the Falls Festival (then named Rock Above the Falls in an attempt to steer wayward travelers away from the turnoff to a popular nearby waterfall) was a one-night only affair and featured just 9 bands.
With an expected crowd of around the 5,000, and at only $20 a ticket, the Daly family were shocked to find they had close to 11,000 new friends show up on the day. Quick thinking saw near by neighbours allowing their land to be used to hold the large numbers. Just after its first year, the Falls Festival was coined a success by organisers and participants alike.
The 1993 festival set solid foundation for the years to come. Word spread quickly on what a success this festival had become. International bands were added to the line-ups, as well as the more sought after Australian acts.
1995 and 1996 saw massive growth. The small family farm in Lorne could not hold the number of people expecting to show up and join in the festivities, and with tickets selling out in record time, they were eventually granted permission from the Lorne City Council to increase the maximum capacity by an extra 2000 people, not surprisingly, after tourism in the area skyrocketed as a direct result of the festival.
The hype of the new millennium promised to be a big one for the Falls Festival in 1999, however, treacherous weather conditions forced the event organisers to move the festival to Torquay, where a similar festival was held. This dramatic change did not deter festival go-ers, in fact, the new grounds allowed for an extra 500 people.
In 2001 event organisers had to deal with international acts pulling out due to fears of terrorism to Australia as a result of the 9/11 terrorist attacks that happened in the US.  It was the perfect opportunity to showcase more home grown music, and like the years that preceded it, tickets were again sold out in only a few days.
With the event coming close to its tenth year, event organisers wanted to give the festival a fast lift. In keeping with current trends, organisers introduced the chill out cinema and comedians to broaden the atmosphere of the event, as well as adding a massive TV screen beside the main stage so people could relax anywhere within the main amphitheatre and still feel like they were involved.
Just like any business, when growth is rapid, expansion can usually help ease the demand. 2003 saw the introduction of the Falls Festival to the picturesque town of Marion Bay, Tasmania. This event was to run at the same time as the event in Lorne, with bands playing on alternate nights at both festivals. Having the festivals run together it would allow organisers to entice even bigger acts to come out to Australia.
The Marion Bay event would almost sell out in the first year and continue to improve over the next three years. Back in Lorne, recycling was becoming a bigger issue for the organisers, which will be further explained later.
2006-2007 saw the Village Arts Extravaganza launched to add to the already growing arts and craft stalls that were established at the festival.  With Fabulous Friday (introduced in 2005-06) for festival attendees to see some of the band’s in a special sneak preview show on the Friday before the event started and the comedian tent and cinema was still growing as well. Another big step for the Festival was the launch of the new website for the July 2006. People were able to subscribe to the official mailing list and be entered into the draw to be offered tickets ahead of the official release date of August 16.
In 2009, Daley launched another bright idea called the Falls Funk’n’Soul Revue. On October 7, 2009 the Falls Festival announced that for the first time they would be putting on a pre-festival party and extending the Falls Funk’n’Soul Revue to Lorne on the 28th December. The extension of the revue makes the Lorne festival a 4-day event stretching from 28 December through to the 1st January. The Funk’n’Soul Revue will occur over two days across the respective states, on the 28th in Lorne and on the 29th in Marion Bay with slightly differing lineups across the two locations.
Year after year, the festival has proved to be a massive success. It continues to have enormous growth and we expect to see much more in the coming years.
Posted by Mez

What do you look forward to most about the Falls Festival?